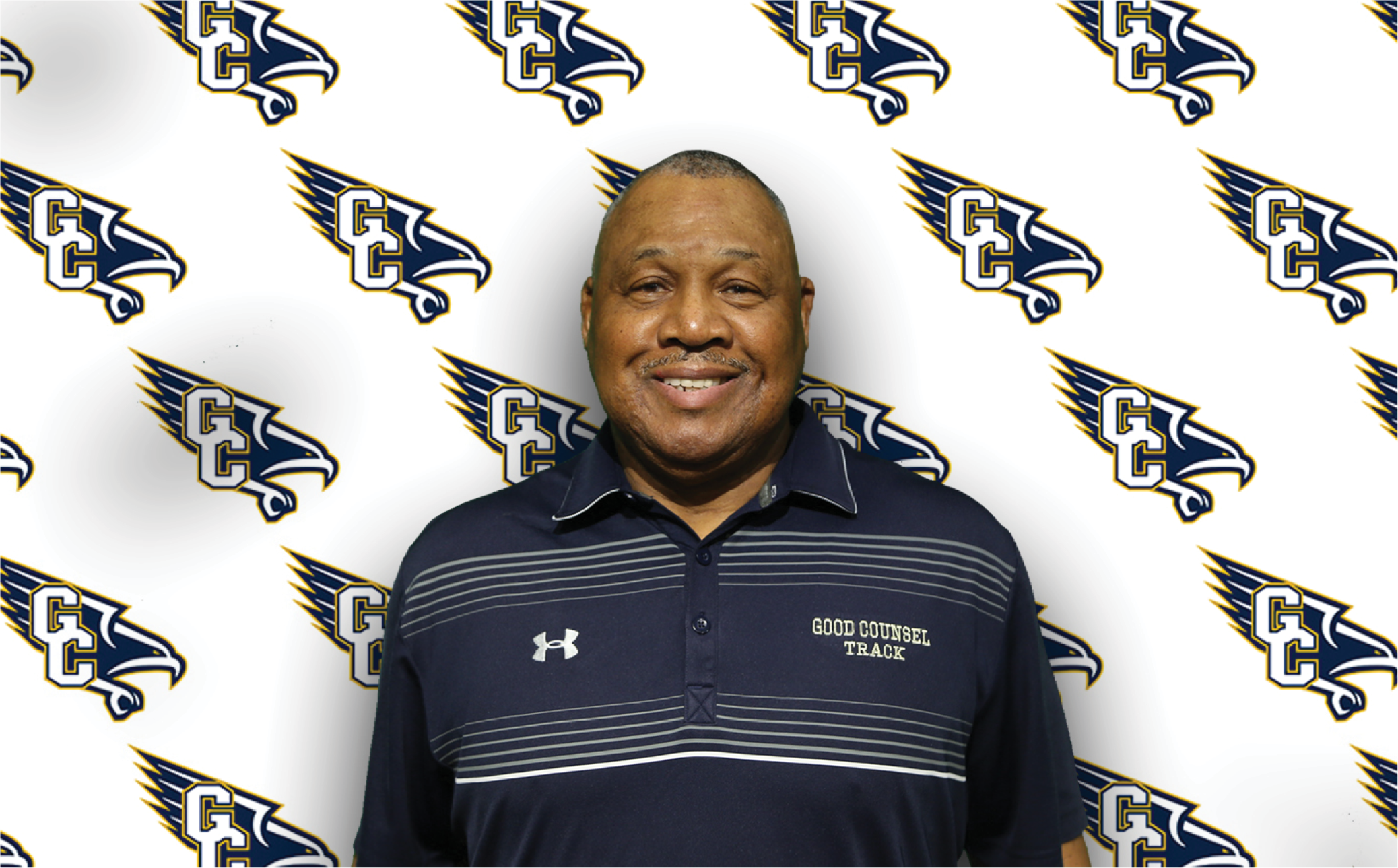 Gene Neal has coached national champions, co-founded a highly successful track program and scored a touchdown in Yankee Stadium. He has been coaching for 40 years. Since 2014, he has served as the Our Lady of Good Counsel indoor and outdoor track and field coach.

Under Neal’s tutelage, it didn’t take long for the Falcons to become one of the top programs in the Washington Catholic Athletic Conference. The boys captured WCAC outdoor track championships in 2016 and ’17.

No players were found for this team

The Washington Post recognized Neal as its 2017 Boys Coach of the Year. Darnell Pratt was named first-team All-Met. He finished the season undefeated in the 400-meter sprint and won the WCAC title in a meet-record 47.78 seconds. He was a two-time All-American (2015-16) in the 200 dash. He went on to play football at the University of Virginia.

After placing third in 2015 and ’16 in the WCAC outdoor championships, the girls moved up to second in 2017. Rachel Pocratsky won two league 800 titles. At Virginia Tech, she was a multiple All-American.

In 2012-13, Neal was head indoor and outdoor track coach at Watkins Mill High School in Gaithersburg, Md. As an assistant specializing in sprint events, he helped Magruder High of Rockville, Md., share the 2014 Maryland girls 4A outdoor championship.

In 1981, Neal and two others founded the Firebirds Track Club. Geared toward 6- to 18-year-olds in upper Montgomery (Md.) County, it began with 45 children. It now reaches more than 200. Dozens have earned All-American status and received college scholarships.

While coaching the Firebirds through 2014, Neal worked with more than 30 individual USA Track & Field national champions. Three of his athletes set national records.

Neal, who sits on the Firebirds’ Board of Directors, has also been youth track and field chairman for the Potomac Valley Athletic Association and Maryland state chairman for the Hershey Track and Field Youth Program.

As a senior at Gaithersburg High in 1965, Neal placed third in the pole vault in the state outdoor championship. It was his only season on the track team. He primarily played baseball and basketball and enjoyed his greatest success in football.

After winning an essay contest from the National Honor Society that helped him pay for college, Neal walked on to the football team at powerhouse Morgan State University. He eventually earned an athletic scholarship.

Under legendary coach Earl Banks, Neal helped the Bears win the 1967 and ’68 Central Intercollegiate Athletic Association championships. Morgan State was a combined 16-1 those two years. In a 34-7 win over Norfolk State in 1968, Neal scored three touchdowns.

The Bears opened the ’68 season with a 9-7 victory over Grambling in Yankee Stadium. They were the first two Historically Black Colleges & Universities to play each other in New York City. Attendance was 64,204.

“When we came out to warm up, hardly anyone was in the stands,” Neal said. “But when we returned to the field prior to kickoff, the place was packed. I had never played in front of so many people before.”

The two teams returned to the House that Ruth Built in 1969. Eddie Robinson’s Tigers won 30-12, but Neal scored a touchdown. He was the team’s leading rusher that year with 563 yards on 135 carries and tallied nine TDs. Following the season, he had a tryout with the Washington Redskins.

Neal graduated from Morgan State in 1970 with a degree in health and physical education.

Neal was born in Washington, D.C., and grew up in Gaithersburg. He worked 28 years for the Montgomery County Recreation Department. He has three sons, Anthony, Derrick and Travis, and a daughter, Jernai. He and his wife, Lori, live in Glen Burnie, Md.