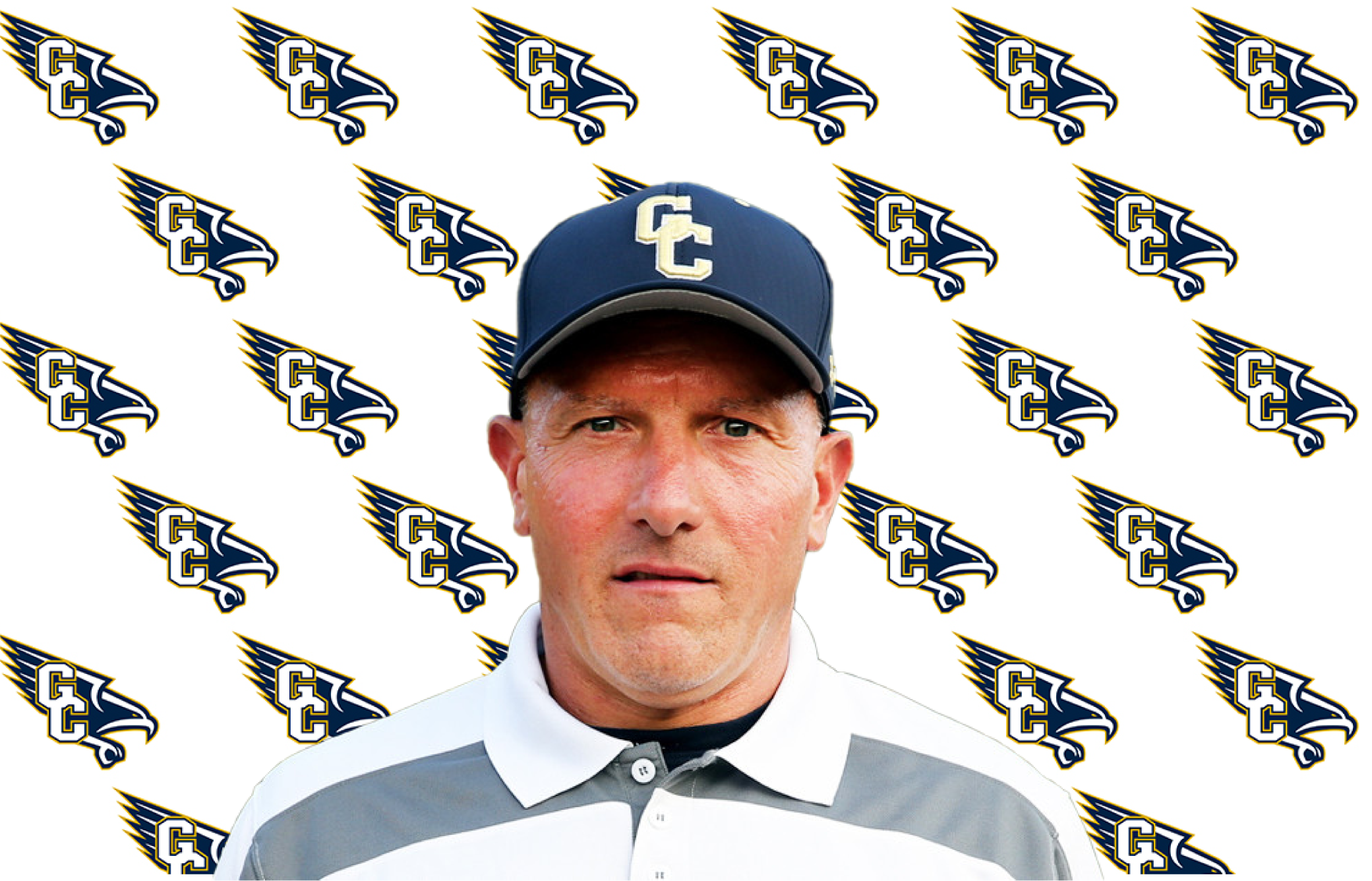 Andy Stefanelli ’83 gained much of his football knowledge from working with Our Lady of Good Counsel’s all-time winningest football coach, Bob Milloy.

Stefanelli has put that experience to good use since succeeding Milloy in 2017. Two years later, he led the Falcons to the Washington Catholic Athletic Conference championship. They finished the season 9-3 and were ranked No. 1 by The Washington Post and No. 11 nationally by MaxPreps.

Stefanelli joined Milloy’s staff in 2007 and spent eight of the next 10 seasons as the Falcons’ head freshman coach and recruiting coordinator. His freshman teams posted a record of 71-2 (.973).

In the meantime, Stefanelli was helping Milloy build Good Counsel into one of the area’s finest teams. The Falcons captured four-straight WCAC titles (2009-12) and finished No. 1 locally each year. USA Today ranked them No. 4 (2011) and No. 10 (2012) nationally.

Good Counsel was 44-4 (.917) those four years and loaded with five future NFL players. Lou Young was a member of the Carolina Panthers for Super Bowl 50. Blake Countess was with the Los Angeles Rams when they advanced to Super Bowl LIII. Stefon Diggs is a Pro Bowl wide receiver for the Buffalo Bills.

Stefanelli spent his first two seasons coaching JV defensive backs and wide receivers. He took the reins of the freshman team in 2009. In his first five years, the squad was undefeated. He also attended all varsity meetings, charted offensive plays on game days and assisted in game planning.

Landon Tengwall was a 2021 Adidas and Under Armour All-American. He, Vince Errigo, Kris Jenkins and Mitchell Melton were first-team All-Mets in 2019. Mason Lundsford was a 2018 first teamer. Jalen Green was a first-team honoree that year and in 2017.

Stefanelli coached in the Rockville (Md.) Football League for 16 years (2001-16), rebuilding a program that had been disbanded into one that eventually had more than 200 players. His teams won multiple league and state championships, and he remains on the program’s executive board. While coaching in the Grassroots Youth Football League, he led the Montgomery County (Md.) Bearcats to three championships (2013-15).

Each year since 2009, Stefanelli has coached eighth-graders in the Maryland Crab Bowl. He was head coach of the bowl’s high school game in 2018. He hosts a prospects camp on campus each summer.

While playing at Good Counsel in 1981 and ’82, Stefanelli was on the first Falcon team to beat St. John’s in back-to-back years. He started the latter half of his junior year at guard and defensive end. As a senior, he was a starting guard and outside linebacker and named team MVP. He graduated in 1983.

Stefanelli was a four-year letterman (1983-86) at Western Maryland (now McDaniel) College in Westminster, Md. He played on special teams his first season and then was a three-year starting guard. As a sophomore, he was named honorable mention All-Conference. He was captain his final two seasons.

Stefanelli was a member of Western Maryland’s Alpha Kappa Delta sociology honor society. As a junior and senior, his name appeared on the Dean’s List. He graduated in 1987 with a bachelor of arts in sociology and a business minor.

Stefanelli is president of Stef Management Corp. He and his brother, Guy, own River Road Auto Service and Autobahn Motor Works in Bethesda, Md.

Born in Silver Spring, Md., Stefanelli was raised there and in nearby Wheaton. He and his wife, Estelle, live in Rockville. Their five children all graduated from Good Counsel. Carly ’10 is girls lacrosse coach at Concordia Prep in Towson, Md. Andrew ’12 played football at Maryland and is now serving a strength and conditioning internship at the University of Oregon.

Perry ’14 was a starting running back at McDaniel College and now works with the Falcons’ strength staff and coaches special teams. Margi ’18 plays club lacrosse at West Virginia University. Jack ’20 is a wide receiver at Robert Morris University in Moon Township, Pa.