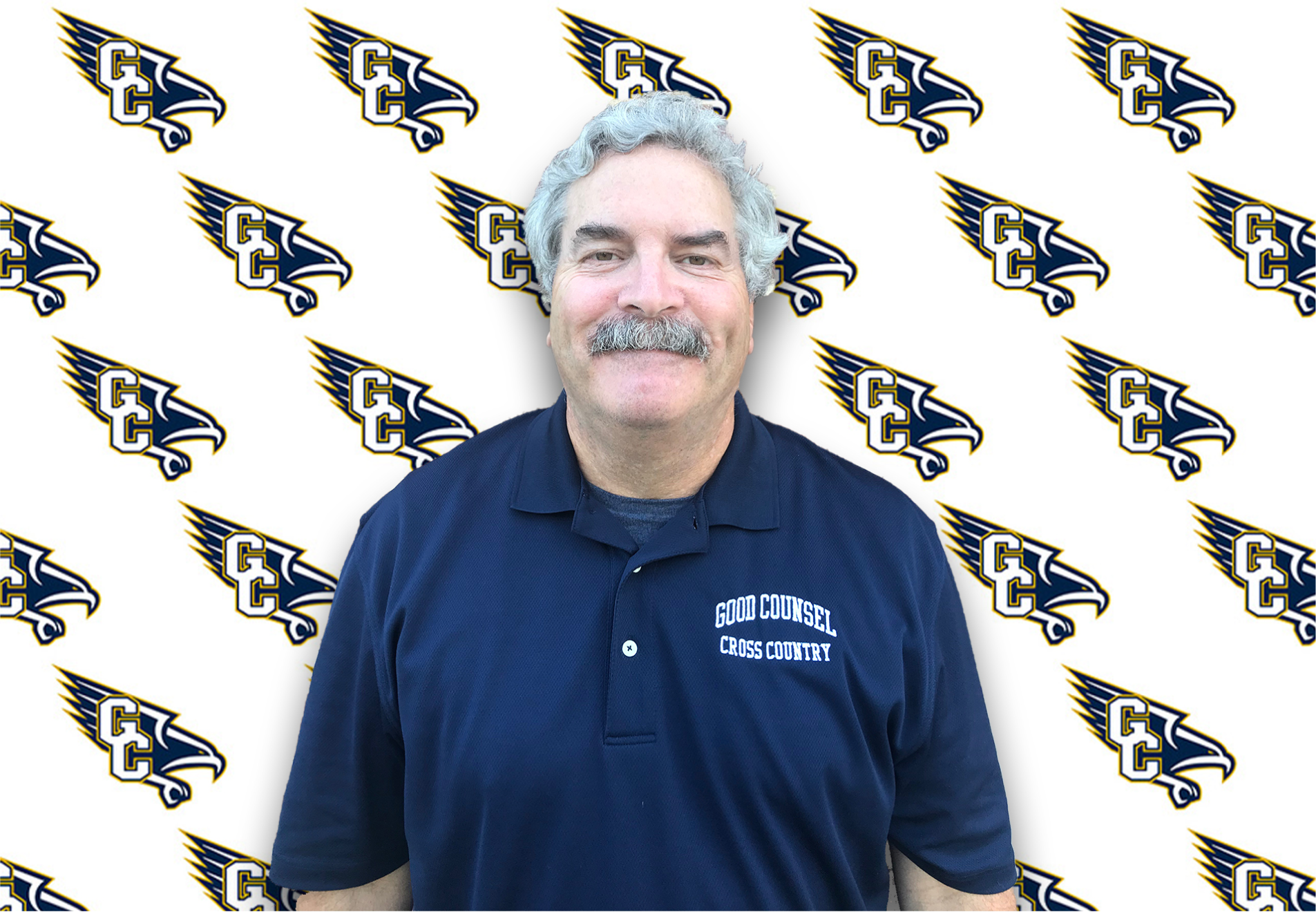 Rich Hiegel has been head coach of the Our Lady of Good Counsel boys and girls cross country teams since 2017. His wide and varied background includes leadership training and coaching an Olympic gold medalist.

“This is a dream job. I absolutely love it,” Hiegel says. “Good Counsel is a very special place to me.”In 2021 and ’22, Hiegel led the girls to a second-place finish in the Washington Catholic Athletic Conference Championships. He helped his star pupil, Leah Stephens, lower her 5K time by four minutes and develop into one of the top athletes in the nation.

Stephens, the No. 1-ranked cross country runner in Maryland the past three years, won the 2021 and ’22 WCAC and Maryland Private Schools championships. Sarah Siegle placed fifth and third, respectively.

At the 2022 Milestat.com Invitational in Mechanicsville, Va., Stephens ran the fastest time by a Maryland girl (16:54 in the 5K) since at least 2000. She holds six school records in cross country and track and earned a full scholarship to Florida State University.

Stephens was selected first-team All-Met by The Washington Post in 2021. This past season, she was named Girls Cross Country Player of the Year.

Stephens was undefeated in five regular-season meets in 2022, including two against national competition. Her sixth-place performance in the Northeast Regionals earned her a spot in the Champs Sports National Cross Country Championships in San Diego. She finished seventh (17:37) in Southern California to earn second-team All-American honors.

Isabella Sauro and Stephens competed in the 2020 RunningLane Cross Country National Championships in Huntsville, Ala.

Hiegel (rhymes with “eagle”) also serves as an assistant coach for the Falcons’ indoor and outdoor track and field teams. He has earned Level 1 coaching certification from the U.S. Track and Field Association.

Hiegel works hard on developing his athletes’ mental approach. He considers things like focus, concentration and visualization to be important keys to success.

“Running is a very mental sport,” he says. “If you have the determination to be successful and the dedication to prepare, you can overcome physical limitations and do very well.”

Hiegel came to Good Counsel after serving as an assistant men’s and women’s track and field coach at Bridgewater (Va.) College in 2016 and ’17. Working primarily with the throwers, he helped the women win indoor and outdoor Old Dominion Athletic Conference championships both years. Katelyn Senger placed fourth in the discus at the 2017 NCAA Division III Outdoor Track and Field Championships to earn All-American honors.

Hiegel became interested in coaching track to train his son, Jamie, who overcame a medical condition to star at Bridgewater. Jamie became an All-American by placing fifth in the 10,000 meters at the 2019 NCAA outdoor championships. Hiegel is now helping him to train for the U.S. Olympic Trials in the marathon.

Hiegel lettered in swimming, track and field and football during his three years (1971-74) at Good Counsel. Competing in sprints, jumps and mid-distance events in outdoor track as a junior, he received the team’s Coaches Award. He had to move because of his father’s illness and graduated in 1975 from Bishop Walsh High School in Cumberland, Md. He participated in track and football.

From there he went to NAIA national track and field power Frostburg (Md.) State University, where he competed in sprints, jumps and one decathlon. After his sophomore season, he left the team for family reasons. He graduated with a bachelor of science degree in sports and recreation management in 1979.

Hiegel spent most of his career working in outdoor recreation for such retail companies as REI and Bass Pro Shops. From 2011-16, he was president and owner of athletic eyewear company Blueye USA.

Hiegel was born in Tokyo and grew up in Kensington, Md., and Williamsburg, Va. He and his wife, Leath, live in Potomac, Md. In addition to Jamie, the couple has a daughter, Colleen.