Feb 25 2020 1:11 PM
Share to FacebookShare to TwitterShare to LinkedInShare to PinterestShare to EmailPrint this page 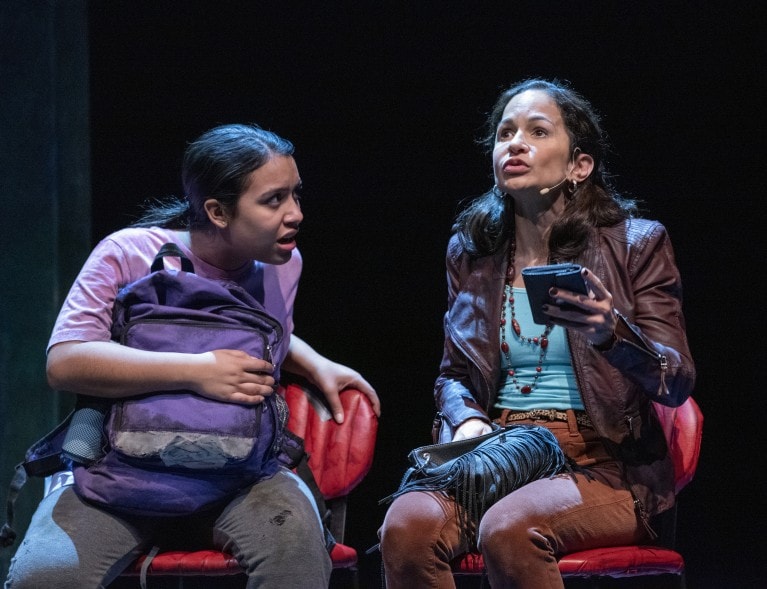 Story from The Greater Olney News by Judith Hruz

Olney Theatre Center's production of "Miss You Like Hell" could make you wonder if someone had a hidden camera in your living room and was filming a conversation between you and your child.

While the circumstances of the story line are quite extraordinary – a mother who left her daughter to be raised by the child's father drives 3,000 miles to beg her daughter to spend a few days with her – anyone who has been a mother, or a daughter, knows the epic battles that the two can have as a girl is trying to find her way to womanhood and a mother is trying to fit into the role of helping her daughter get there.

The ability to connect with the mother and daughter in Olney Theatre's staging of "Miss You Like Hell" is in large part because of the way Valeria Morales brings Olivia, the teenage daughter, to life.

Not only does she brilliantly portray Olivia, she lives in Olney and is a freshman at Our Lady of Good Counsel High School, and is the typical girl next door, literally and figuratively.

"It is such an honor to be able to tell this story," Valeria said after a matinee performance in the early run of the play.

The "story" that Valeria refers to, however, is not just the story of a mother and daughter navigating a cross-country trip while trying to fit together the pieces of their lives.

It is the story of an undocumented immigrant – the mother, portrayed, also brilliantly, by Karmine Alers – and her desperate attempt to convince not just her daughter, but immigration officials, that she is worthy of staying in the United States.

Valeria understands the impact of immigration and the role it plays in national politics and policies. She said she appreciates being able to share the story on stage.

It is a responsibility she does not take lightly.

"There is no romanticizing deportation," she said.

She also understands the emotional impact the play has on the audience.

During a matinee performance, dozens of audience members sat silent after the show ended, wiping tears from their eyes.

Playing Olivia is the first professional role for Valeria, the 15-year-old daughter of Zoila Marroquin and Julio Morales. She has been involved in drama clubs, speech and debate, and community performing arts workshops since middle school.

She learned in August that she earned the role.

"I am so in touch with Olivia," Valeria said.

Her Guatemalan heritage – she beamed with pride when she talked about that — and her understanding of "typical, bratty teenagers" — she laughed and admitted to taking on that role, too, from time to time — help her relate to the character.

But it is also the change that Olivia experiences, the way she grows up and really listens to her mother's side of the story instead of blaming her mother for abandoning her, that makes Valeria proud to say she connects with the character.

"Everything about her grows up – her emotions, being able to put her own feelings aside, even the clothes she wears," Valeria said. "She learns a lot along the way."

Olney Theatre Center's production of Quiara Alegría Hudes' newest musical, "Miss You Like Hell," is featured on the Mainstage through March 1. Hudes, a Pulitzer Prize-winning playwright and Lin-Manuel Miranda's collaborator on the book and film of "In The Heights," wrote the book and shares credit for the lyrics with folk-rock star Erin McKeown, who also wrote the music. Lisa Portes and Breon Arzell make their Olney Theatre debuts as director and choreographer, respectively.

Performances are Wednesday through Saturday at 8 p.m., and matinees on Saturday and Sunday at 2 p.m. For tickets, call Olney Theatre Center at 301-924-3400 or visit www.olneytheatre.org.