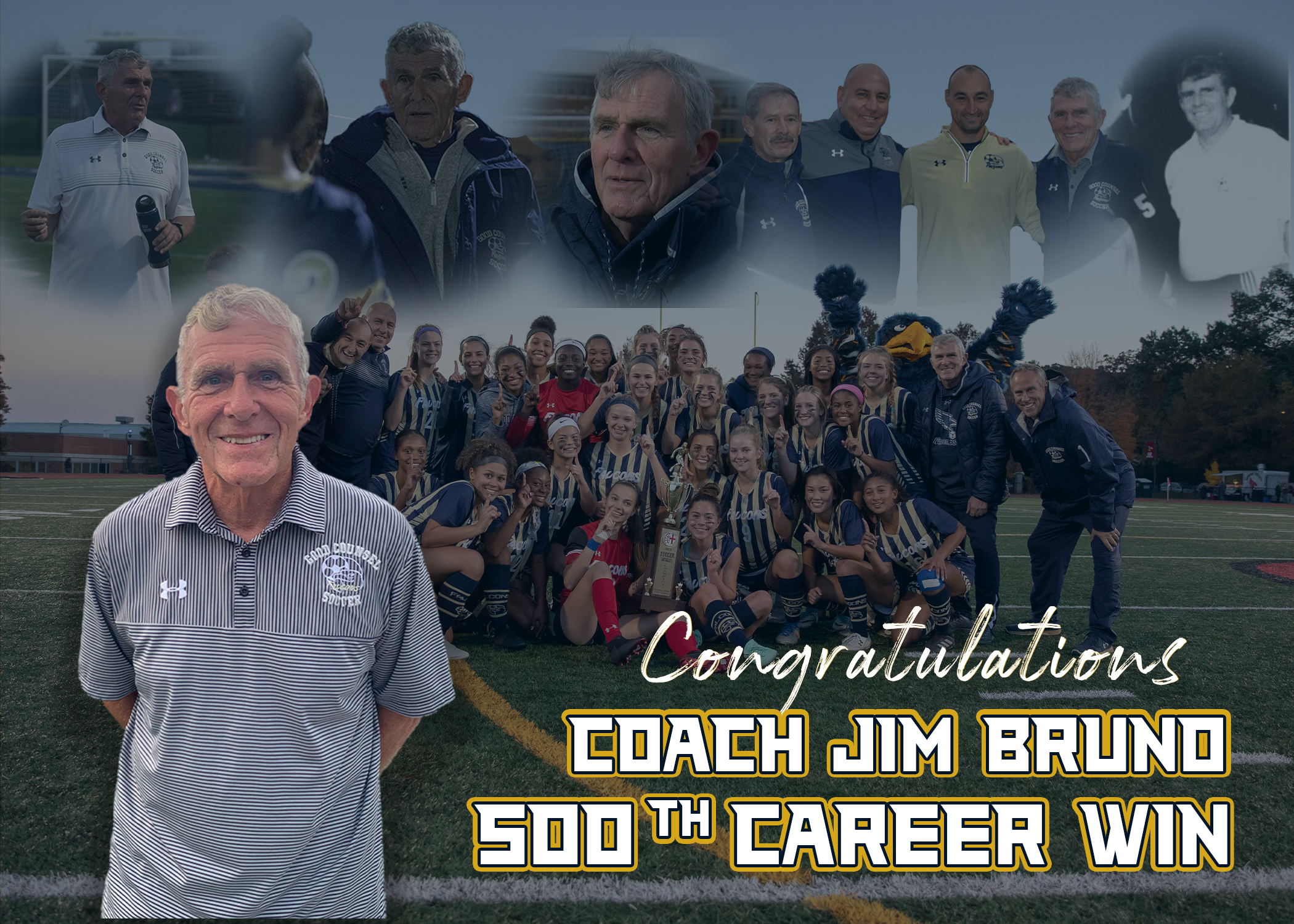 Bruno's overall record now stands at 500-114-70 (.782 winning percentage). All of his victories have come in his 34 seasons at Good Counsel. He is the school's only girls soccer coach and was inducted into its Hall of Fame in 2001.

"Winning 500 games is a tremendous accomplishment. Very few coaches ever reach that," Falcons Athletic Director Steve Howes said. "The positive influence he has had on the lives of countless players is even more impressive. He is a treasure in the Good Counsel community."

Bruno became the Falcons' head coach in 1988. He is proud to achieve the 500-win plateau and quick to credit all those who have contributed to his success.

"I think about the people I have shared this with, particularly the players and coaches," Bruno said. "What resonates with me is not only to have the chance to work with such incredible people but also to coach some terrific young ladies.

"This is a great accomplishment for the program."

Bruno's current team is 7-0, ranked second in the area by The Washington Post and 13th in the nation by United Soccer Coaches. They defeated then-national No. 1 McDonogh School 3-0 on Sept. 11.

"This is one of the best teams I've ever had," Bruno said.

Bruno has never had a losing season and has won 13 Washington Catholic Athletic Conference championships. He said the title that ranks highest to him is his first WCAC championship, which came in 1995, two years after the league was formed.

Bishop O'Connell High School won the regular-season title that year and entered the conference tournament undefeated and ranked fourth nationally. In those days, if the champion lost in the tournament, it could re-enter once and keep playing.

Good Counsel beat O'Connell 3-2 in sudden death overtime and then had to beat them again the next night, this time 1-o. Yvonne Heffernan scored the game-winning goal each time. Goalkeeper Stephanie Howes recorded the shutout.

"I probably remember that championship more than any of them," Bruno said. "It was a big deal."

After tying their first two games in 1988, Bruno got his first victory over Immaculata. He remembers going out for pizza to celebrate. That squad finished 12-5-2. His team's best record came in 1998 (22-0-3), and United Soccer Coaches honored him as National Private School Girls Coach of the Year.

Bruno has helped dozens of players earn college scholarships. Purce, Dorsey and Megan Hinz play professionally in the National Women's Soccer League for NJ/NY Gotham FC. Purce is a member of the United States Women's National Team and has a good chance to play in the 2023 World Cup.

Bruno maintains a good relationship with many former players.

"They let me know when they get married, have a baby, get a new job; those are really neat things," he said. "They still remember, and a lot of them say their best days were at Good Counsel High School soccer."